Members of the Fountain Engineering recently attended RailsConf 2022 in Portland, OR! 🎉

In this post, the first part of a 2-part series, team members reflect on their conference experiences including selecting sessions, Fountain’s booth presence and conference sponsorship, meeting up in person, and more. In a future post, attendees will describe their favorite sessions and link to the public recordings.

For many attendees, due to the COVID-19 pandemic, this was their first in-person conference in years. There were feelings of both excitement and concern. The conference organizers did a great job with health and safety protocols.. 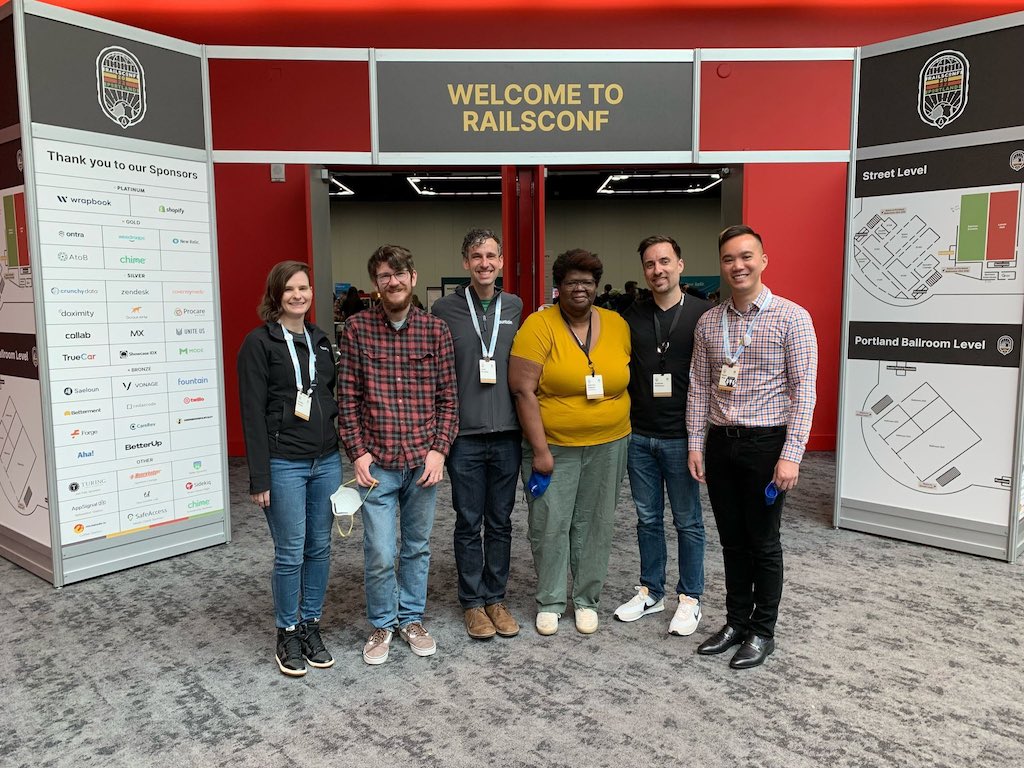 RailsConf 2022 in Portland, OR has come to a close! For me it was energizing and inspirational. I enjoyed meeting up Fountain co-workers in person for the first time, some of whom were in the Portland area or attending RailsConf. I also enjoyed meeting people via the unofficial pre-conference morning jogs.

Fountain was a RailsConf sponsor this year, which meant getting the company logo placed around the conference, and having a booth presence where visitors could learn about the company and product. Ryan and Kristin staffed the booth during the 2 days of the job fair and did a great job! Other Fountain conference attendees rotated around the booth occasionally, answering questions as well or just hanging out. Ryan and Kristin helped raise awareness about Fountain the company, the product, the customer challenges, and more. Getting the Fountain company name in front of RailsConf attendees hopefully helps us attract and hire more awesome engineering talent to join the team.

RailsConf was a surreal experience for me. For 3 years in a row, RailsConf was scheduled at a local venue. Confreaks and through Ruby Central have done wonders at making talks accessible for the last 10 years, but I was a first-timer.

Andy’s talk on PostgreSQL wasn’t the only talk mentioning Fountain. In the lightning talks, Vladimir shouts out fountain for incubating the test prof gem who made for a good interview after the talk. Evil Martians collaborated in a big way on our primary rails repository. We contemplated static code analysis vs unit testing for code correctness. It seems integration tests passing has more business value than a large suite of code execution tools.

Shopify is making bold moves and picking up key people but the message they are sharing seems legitimate. Companies who sponsor work on open source products make the tooling better for everyone. Fountain has some work to do to embrace open source and contributing.

The framework took a bent towards the front end with Rails 7, and there’s not much value for Fountain in jumping here. We’ve experimented with stimulus for some of our internal tools, but React seems to remain king at Fountain. We’re shifting towards rails as our API almost exclusively. Biggest takeaway for rails/main is to make sure the H2O proxy is set up to handle the new sparse bundling.

I’m really impressed with fountain in the time I’ve seen them evolve, our engineering force has tripled and I’m super excited to see opportunities open up to make a difference upstream. The problems we are solving as we become experts in analyzing data and automating tasks puts us in a great place to work with library authors for solutions rather than relying on outdated forks.

@DHH has some opinions on why he didn’t keynote, and as the author of the framework I’m hurt he didn’t swallow the pride and come down to PDX but I understand why RubyCentral didn’t want his rhetoric. The community is fractured. Day after I met Evan Phoenix we’re wishing him goodbye.

Thanks to @schneems who I met picking up badges–the first attendee I speak with happens to be one of 2 twitter-level friends I met. I had the best seat for @tenderlove ❤️ talk and his arbitrary byte sequence joke may have been a bit transparent, it was perfectly suited for the crowd. Thanks for the cat sticker, RIP Gorbachev. If you ever see a guy with a fountain and cat sticker on his laptop come say hi. Also shout out to emcee and https://pdxruby.org Ruby Tuesday hero who kept things going during the pandemic The Jonah Show.

I also hope that next RailsConf my proposal will be accepted even though I don’t know what it’s going to be about yet. In 2020 I would have been a scholar if not for the pandemic, and may have pigeonholed myself a junior had I not shuffled board seats and management roles during that time.

After over two years of remote work, RailsConf was my first tech conference in almost three years! The energy of RailsConf and all its attendees was contagious! Having joined Fountain in July of last year, RailsConf was also my first chance to meet some of my fellow Fountaineers since joining. It was truly surreal the first morning seeing each other in real life and not in Zoom meetings, but also completely refreshing to be able to spend time talking, listening, and hanging out in-person (shout out to Sabrina, my conference buddy).

It was an experience which I leaned into as much as I could to maximize my time with my fellow Fountaineers (hello late-night drinks followed by 7:30 AM runs around Portland) and I can say I enjoyed every minute of it and I can’t wait for the next time I can spend time with Fountaineers in person.

Fountain was also a sponsor of RailsConf and it was amazing to see our logo around various places in the convention center. Being a sponsor also means a booth so I got the opportunity to try to evangelize Fountain a bit by spending some time at the Fountain booth with Ryan and Kristin (props to both of you for holding it down!) and talking to other engineers about what and who Fountain is.

After almost 3 years of working remotely, RailsConf was a breath of fresh air and a much needed bolt of energy. I had the privilege of staffing our booth in the exhibition hall, where I got to meet and chat with a variety of folks in the industry—something I haven’t been able to do in quite some time.

One thing that really stood out to me while attending RailsConf was how valuable participating in the conference felt. It has been quite some time since I was able to participate in face-to-face networking in the tech industry, and even longer since I was able to represent the company I was working for. I loved both hearing about interesting things that others are doing in the industry, and sharing with others what innovative and interesting things we are working on at Fountain. Lots of learnings were spread about for all!

A (huge) added bonus to attending RailsConf this year was that I was able to meet many of my coworkers in person for the first time and show them around Portland!

My favorite thing about conferences is the opportunity to learn about both known-unknowns and unknown-unknowns. There are those talks you attend because you know about the topic, and want to learn more - I found David Copeland’s talk on Services in Rails both engaging, and especially relevant to my current work, while Fountain’s own Andrew Atkinson also gave a great talk on solutions for scaling PostgreSQL Rails Apps. Then there are those talks you attend either because you’re only vaguely familiar with the topic and want to learn the basics, or just due to a creative title - I couldn’t help but be drawn in by the Star Trek theme of Justin Bowen’s (Q)ueuing Theory Talk.

Of course the technical talks are only one part of what makes the conference experience so great. Crystal Tia Martin’s Opening Keynote on the third day was a great reminder of the social pressures we put on ourselves as developers, and I had the opportunity to meet several of my remote coworkers in person! It was a great opportunity to be around so much enthusiasm, and get to know some of the people behind the faces that are on my screen day-to-day.

I’m thankful to be part of such a great group of people at Fountain. It was exciting to see all the work that Ryan and Kristen put into our booth, as well as the conversations that came from visits to the booth and Andrew’s talk. I can’t wait to see the team grow, and continue contributing to the greater community.

After spending the past 2+ years working from my home office, attending the RailsConf in person was a fabulous experience and a much needed change of scenery. Since joining Fountain late last year, I had only seen my colleagues only on my monitor screens via zoom, so seeing them in person and chatting with all of them brought so much joy and was very insightful. This conference also enabled us to meet the other local Portland Fountaineers.

At the conference, the energy of everyone was so refreshing and contagious. It felt great to be in a room full of inspirational discussions and insightful ideas. I would love to return soon and get more involved in the future. Also, Fountain was a sponsor of the RailsConf, which meant we had one of our own shiny booth at the Exhibit hall. Kristin and Ryan primarily manned the booth so splendidly and it was so awesome to see folks being interested in learning more about Fountain and our great culture. Additionally, our own Andy A gave such a wonderful talk on scaling PostgreSQL Rails Apps. Huge shout out to all the coworkers for making this a very awesome learning experience. 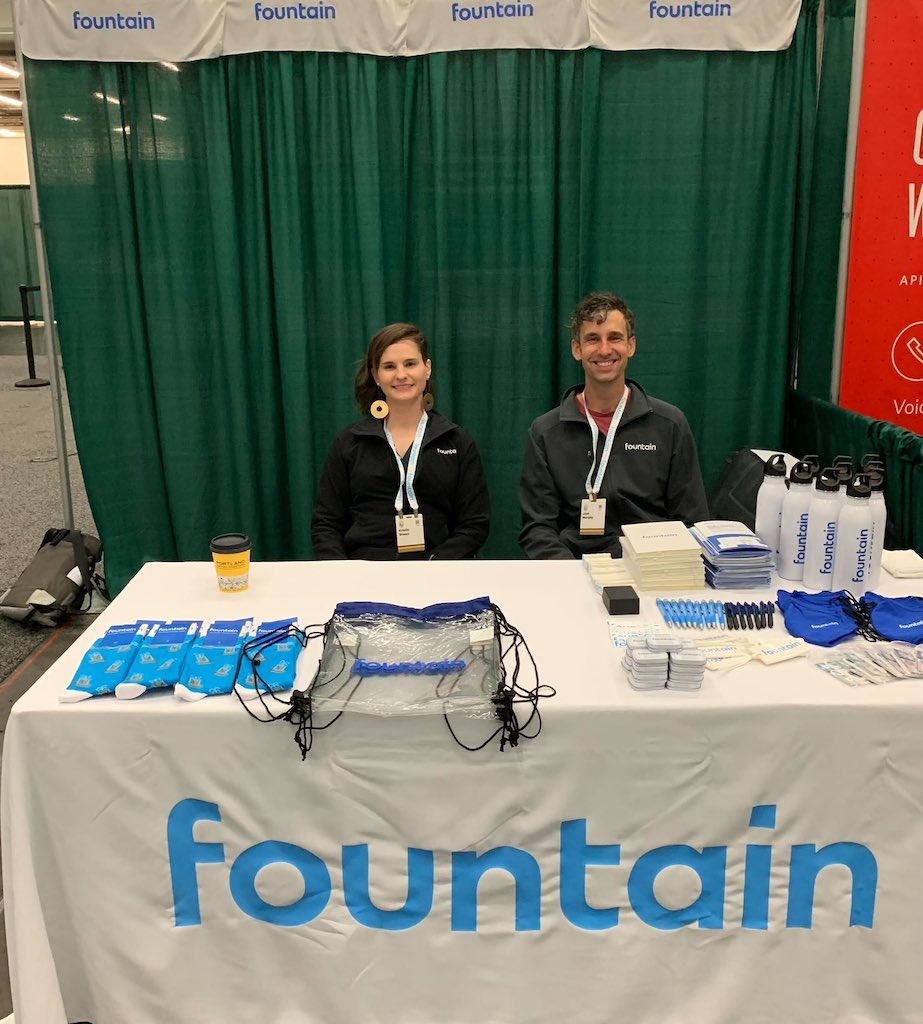 Meeting up in person is a great way to strengthen bonds on teams. Having several opportunities to connect with Fountaineers throughout the week was a great opportunity.

Pictured below is one of the team dinners for RailsConf attendees and Fountain engineering team members. 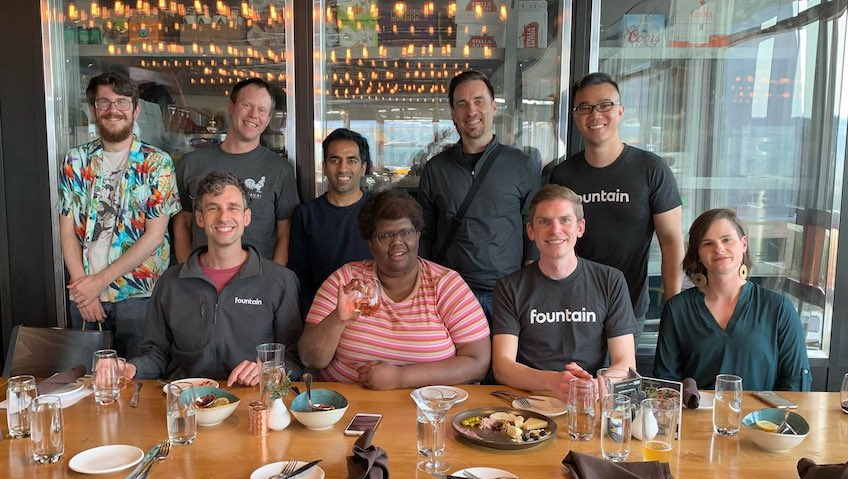 Check back here for the next post in this 2-part series where Fountaineers will share their favorite conference sessions and what they liked.

Until then, thanks for reading!